Knowing each other for almost 6 years, Litsa and Salvotore were married on December 1st, with there wedding ceremony at St Ignatius followed by a reception at Brighton Savoy. During their wedding planning, the couple expect that their reception would involve a lots of dancing, and they are looking to find a videography service that is capable to capture the entire coverage of the dancing. They soon noticed Tree Studio as we excel at shooting the dancing by setting up multiple camera angles.

On their wedding day, we started by shooting the getting ready of Litsa and Salvotore. And during the shooting, we also managed to do some super-detail shots of the couple’s jewelry and watches, which are featured in the final video production. At the end of the groom’s getting ready, we are invited to capture the car shots where our groom showcasing his Harley-Davidson bike.

After the getting ready, we soon headed to the St Ignatius church. Located in the heart of Richmond, it is one of the most popular wedding ceremony venues to get married with a Catholic blessing in Melbourne. For the ceremony, as the father revealed that there will be quite a few guests who will come up and do readings. Our videographer set up a direct microphone input from the desk as well as a pocket mic inside the groom’s blazer, so we can capture crystal clear voice from everyone.

After the ceremony, we did few rounds of car shoots with the couple in front of the church. I have to say the cars, the couple and the backdrop of the church worked perfectly. Then we headed to the Melbourne CBD. As the bride loves fashion, we decided to do some shootings in front of Chanel on Collins Street. The white background and the couple created an elegant and timeless theme to the video.

The reception at the Brighton Savoy was sensational. The room was decorated with flowers and candles. After the cake cutting and the first dancing. The bride was invited to do a round of surprise dance for the groom. Our videographer set up multiple camera to capture the dance as well the expression of the groom.

Thank you Litsa and Salvotore for inviting the Tree Studio to be a part of your big day.
Share
0 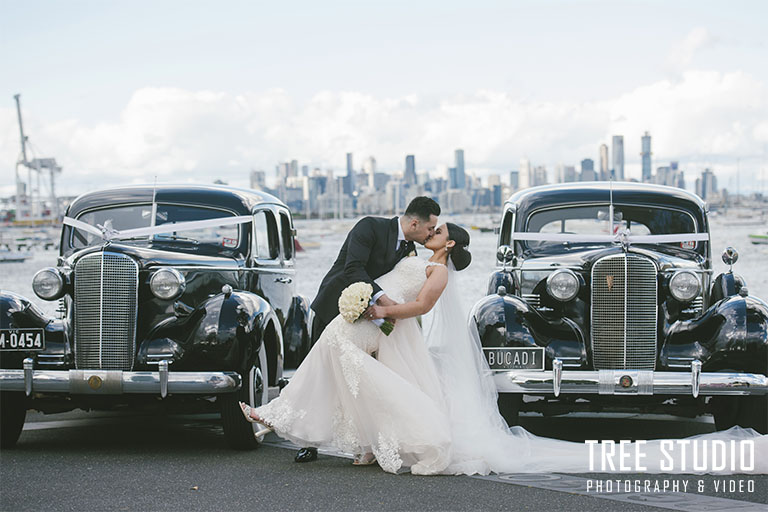